5-MeO-DMT: A primer on a potent psychedelic

By Melissa Warner and Jasmine Blom

5-MeO-DMT is a unique and compelling member of the modern psychedelic pharmacopoeia. Spectacular and succinct an experience, 5-MeO-DMT has broken into popular culture as a shooting star psychedelic. Famous for its origins from the venom of the Sonoran Desert toad, 5-MeO-DMT is finding its way into the lab, dinner table conversations, and international retreat centres. The rise in exposure has led to the outing of malpractice by several underground guides as well as a growing awareness of unsustainable toad ‘farming’ practices. Scientifically a scramble to get 5-MeO-DMT into the lab has begun, with both for-profit ventures and not-for profit benefit organisations paving the path for a variety of delivery methods. This multi-part series seeks to separate history from hype, science from scandal and potential from myth. 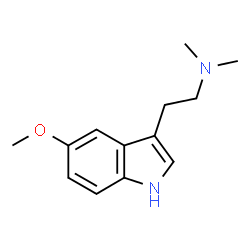 5-Methoxy-N, N-dimethyltryptamine (5-MeO-DMT) is a psychoactive compound capable of inducing powerful psychedelic states. 5-MeO-DMT has been shown to have potential for therapeutic use in the treatment of mood disorders and to enhance wellbeing (Lima da Cruz R.V et al., 2018).

5-MeO-DMT is found naturally within the venom of the Colorado River Toad (of the Sonoran Desert) – otherwise known as Bufo Alvarius, as well as several plant species and, can also be synthetically manufactured (Barsuglia et al., 2018).

Historical context and history of use

5-MeO-DMT was first synthesised in 1936 by Canadian chemist Richard Manske. It wasn’t until 1956 that naturally occurring 5-MeO-DMT was found in the plant species Dictyoloma incanesce, then later in Anadenanthera Peregina, otherwise known as yopo seeds – where it was isolated and used in South American snuffs (tobacco). Then in 1965 5-MeO-DMT was discovered in venom of the Bufo Alvarius toad.

Weil (1994) speculates that Mesoamerindian shamans and some Native Americans (Psychedelic Toad of the Sonoran Desert, 2021) knew about Bufo Alvarius before it being discovered by western consciousness explorers; however, no conclusive evidence of Mesoamerindian shamanic use exists. Up until the 1980s, the psychedelic community was almost unaware of 5-MeO-DMT in Bufo Alvaruis toads. Then in 1983, the environmental activist and psychedelic researcher Ken Nelson first self-experimented with naturally occurring 5-MeO-DMT. His curiosity led him to Arizona, and he became the first known person from the west to experience smoking the venom of Bufo Alvarius (Psychedelic Toad of the Sonoran Desert, 2021). He later released an infamous pamphlet titled Bufo Alvarius: The Psychedelic Toad of the Sonoran Desert. Under the guise of Ken’s pseudo name Albert Most, this pamphlet was a practical how-to guide on identifying Bufo Alvarius, collecting and smoking its venom, along with a detailed description of the 5-MeO-DMT synthesis. Additionally, Ken’s discovery of Bufo Alvarius is described as being “completely absorbed in a complex chemical event, characterized by an overload of thoughts and perceptions, brief collapse of the ego, and a loss of the space-time continuum (Morris, H., 2021)”. Currently, 5-MeO-DMT is a scheduled I drug in the US and remains illegal in Australia. 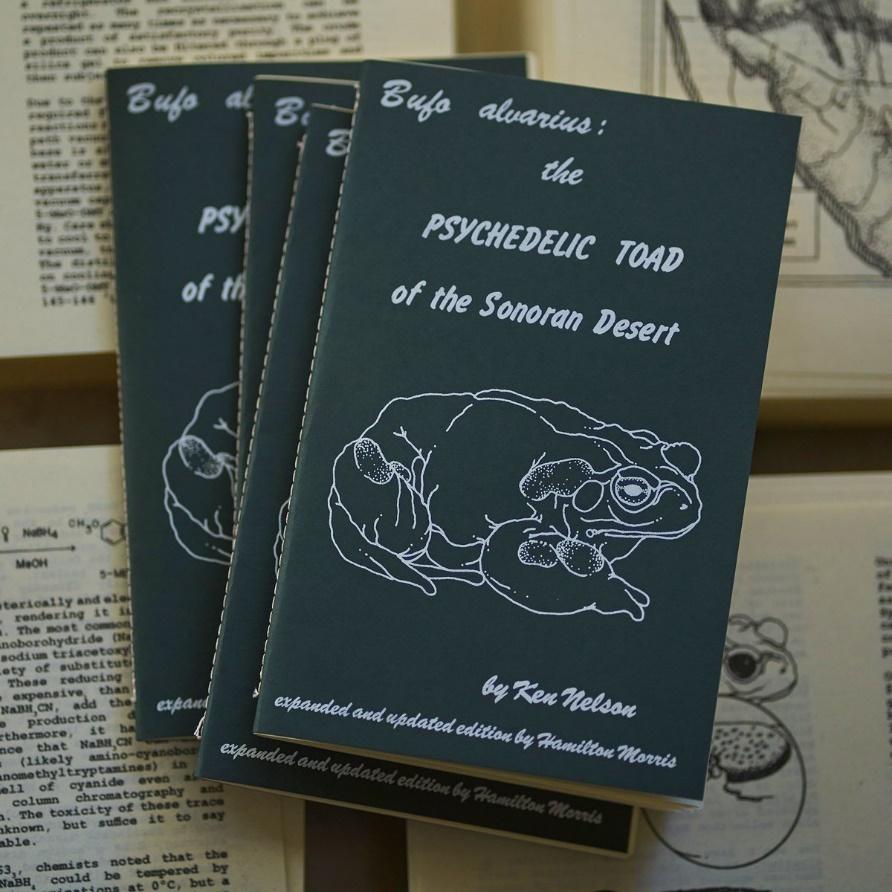 The intensity of the acute experience illicited by 5-MeO-DMT has some unioque properties. A 2018 study by Barsuglia et al. demonstrated 5-MeO-DMT produces higher rates of complete mystical states when compared to psilocybin lab-samples for comparable quantities. Mystical experiences induced from psilocybin are primary predictors for therapeutic outcomes in patients with substance use disorders and anxiety and depression (Scheidegger, 2021). Taken together, this suggests that 5-MeO-DMT may offer substantive potential as a therapeutic adjunct for clinical interventions and is a prime candidate for further research.

5-MeO-DMT offers a range of administrational methods including vaporisation, which lasts up to 20 minutes and intramuscular injection (IM), which lasts up to an hour. A small observational study (Uthaug et al., 2020) reported that IM 5-MeO-DMT produced gradual sensations of ‘relaxing and immersive’ feelings, compared with methods of vaporisation, which were described as “powerful, quick, and disorienting”. Furthermore, the physical effects of IM 5-MeO-DMT involved a relief of physical tension which was significantly greater that the vaporised compound.

The capacity of 5-MeO-DMT to release physical tensions, could underlie the somatic release of emotional tension and may assist in the treatment of mental illness such as trauma and chronic pain disorders in the future.  Somatic-based therapies such as Somatic Experiencing, are body-based approaches which engage the interception of emotion and tension to therapeutically treat trauma and other stress-related disorders. Somatic therapies aim to bring awareness and release of trauma through the physical reprocessing of embodied trauma-based memory. Somatic-based approaches support individuals to more easily access their nervous system’s ability to shift from dysregulated arousal and or frozen states of regulation. Future research may benefit from including a somatic approach in the preparation and integration of 5-MeO-DMT-assisted therapy. Look out for a future PRISM blog exploring this further.

The modular duration of 5-MeO-DMT results from different modes of administration may benefit some therapeutic models by condensing the psychotherapy duration to between 20 and 60 minutes, instead of the 6+ hours as is currently the case with some classic psychedelics, such as psilocybin (Barsuglia et al., 2018). Further research on 5-MeO-DMT is required to study the effects of both vaporised and IM administration in a clinical setting to ensure safety and ascertain the benefits of each approach. 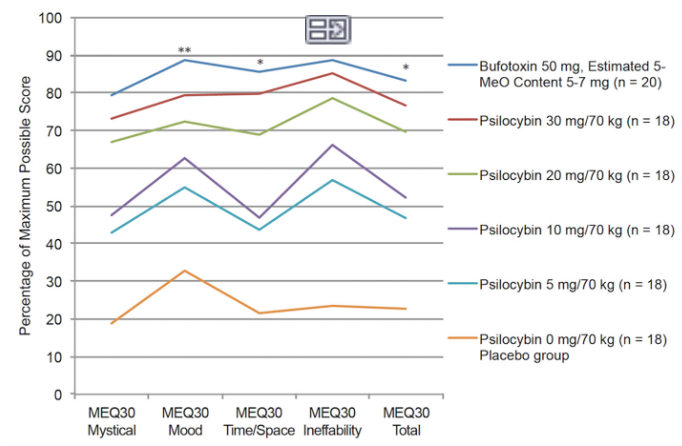 An in virto study found that a single dose of 5-MeO-DMT increased proliferation and survivability of neurons in adult mice. This process is known as neurogenesis and is most commonly located in the subgranular zone (SGZ) regions of the brain and is associated with memory development. Neurogenesis stagnates with age, and deficits in adult neurogenesis have been linked to depressive symptoms (Lima da Cruz R.V et al., 2018). 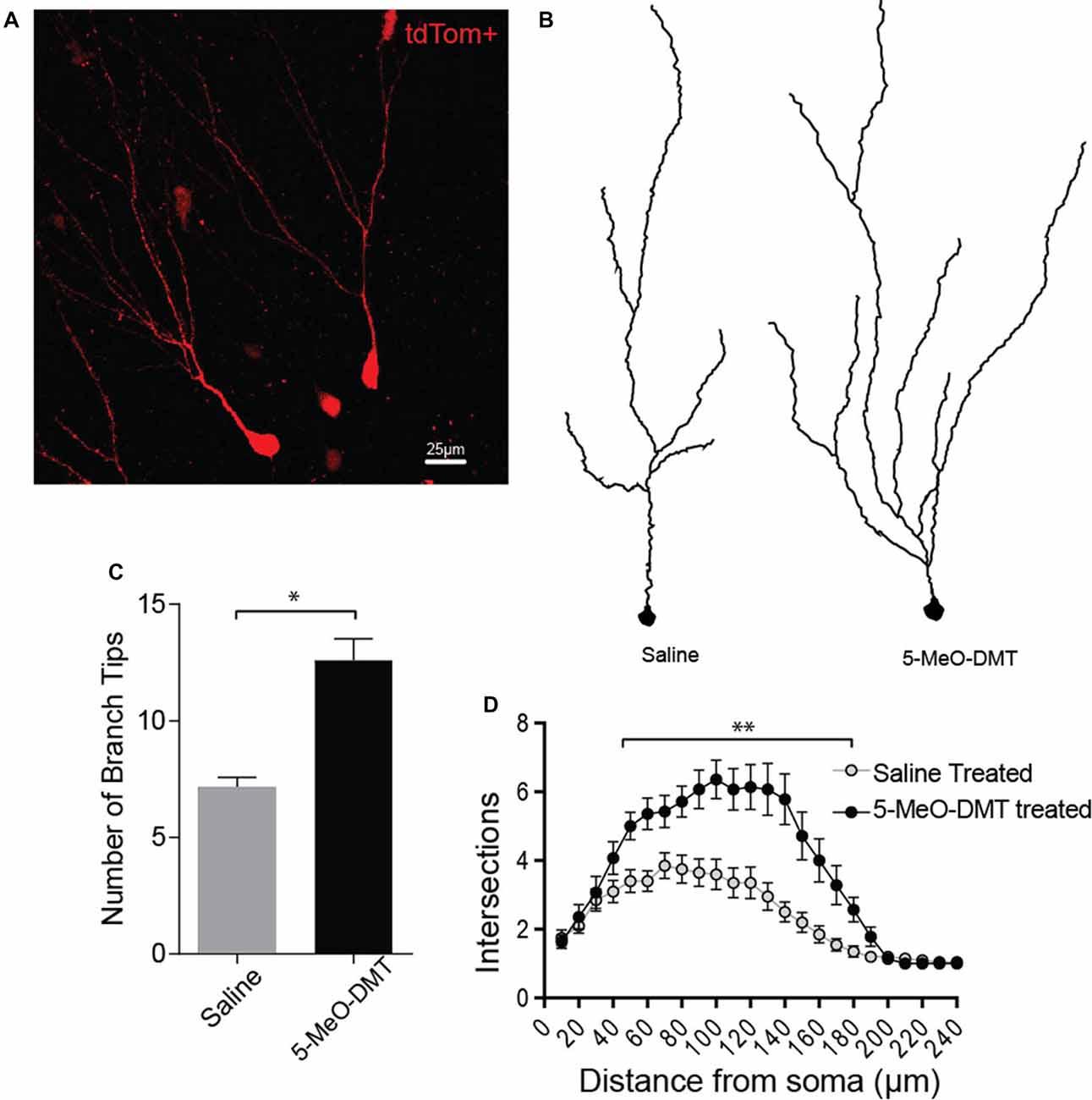 The first dose-ranging study in the lab found 5-MeO-DMT to be well tolerated in 22 healthy volunteers (Reckweg, 2021).   Observational studies (Uthaug et al., 2020) indicate that 5-MeO-DMT may help with various mental health conditions including depression, anxiety, trauma, and addiction. Due to the intensity of the experience, preparation and integration of 5-MeO-DMT experiences maybe even more specific and delicate than other psychedelics. Hence, clinical research on effective therapeutic models for 5-MeO-DMT-assisted therapy are needed.

Barsuglia (2018) states that 5-MeO-DMT appears to be relatively safe in low does with a low potential for addiction. Having a pre-existing condition or combining 5-MeO-DMT with other pharmaceutical medications, could increase the risk of harm from 5-MeO-DMT. Research is required to assess safety, inform dosing and clarify contraindications.

Ecological awareness – the difference between synthetic and natural

Bufo Alvarius is the only animal on earth known to biosynthesis a true entheogen like 5-MeO-DMT (Morris H., 2021). This unique characteristic has now placed the psychedelic-producing toad at the centre of a trauma-induced practice and therefore, raised many ethical concerns for those continuing to use Bufo Alvarius (Ferris T., 2021). The process for preparing 5-MeO-DMT from Bufo Alvarius involves expelling venom from the toad’s pores by squeezing/milking it onto an external source such as glass. It is then dried, broken up into crystal-like fragments, and inhaled.

As the popularity of 5-MeO-DMT continues to rise, so too does the ecological threat to the Bufo Alvarius species. An increasing number of concerns are being raised about the impact and sustainability of this naturally occurring psychedelic. The natural vs. synthetic debate is still widely argued. “Smoking this (Bufo Alvarius) venom can have a virtually identical effect to smoking laboratory-synthesized 5-MeO-DMT (Oroc, J., 2009).” So why are people continuing to smoke Bufo Alvarius? 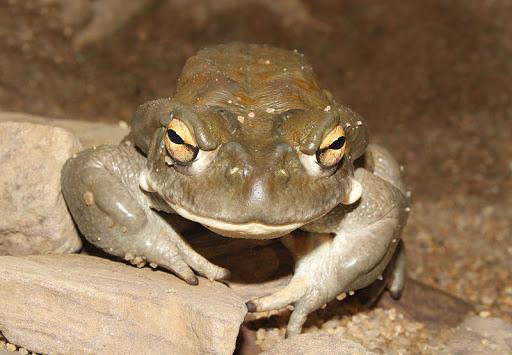 Bufo Alavarius can be found in parts of Southwestern California, New Mexico, Arizona, and parts of Mexico. A steady increase in human contact has meant a disruption of the natural habitat, threatening existence. The process of capturing, squeezing/milking, handling, and re-releasing the toad has the potential for transferring human bacteria back into the ecosystem. Additionally, their milk-like venom acts as a defence mechanism towards predators and therefore places great risk if emptied. Further, industrialisation has increased the amount killed on highways and roads. Their freeze-like reaction to artificial light is a response that attracts them to lit highways, making them easier to capture.

Many who continue to smoke Bufo Alvarius argue that this toad has a natural, unique blend of compounds, which can’t be synthetically replicate and are integral to the overall experience. This is known as ‘the entourage effect’. Some scientists insist there isn’t sufficient evidence for this claim. Synthetically produced 5-MeO-DMT is identical – at the core to what the toad produces, making it difficult to differentiate why the experience wouldn’t suffice. Spiritual beliefs and perceptions between the two versions could influence outcomes of the experience, however education on sustainability is supporting the rise of a more sustainable perspective. 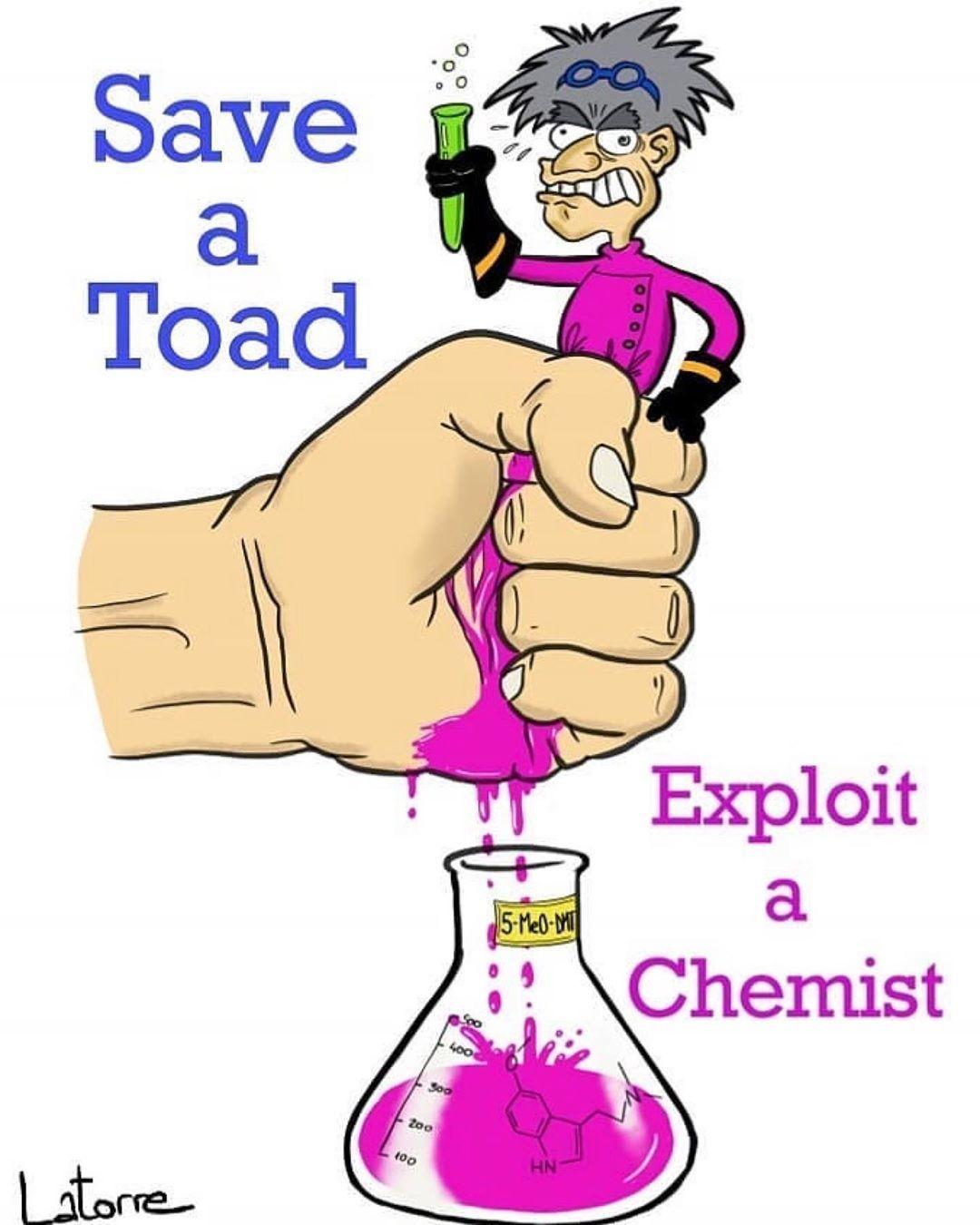 5-MeO-DMT research in Australia and PRISM

PRISM is leading the research into this promising and fascinating compound alongside the Usona Institute at Swinburne University in Australia. Please consider offering your support for this ground-breaking work.

5-MeO-DMT is an under researched psychedelic with great potential. The altered state it produces exerts a profound and short-acting effect on consciousness and has led to improvements in wellbeing. Previous research has indicated that 5-MeO-DMT has a relatively safe profile of use, but there is still much to learn about the neurological effects and benefits of the experience on wellbeing, health markers and neurological mechanisms.

PRISM and Usona share a vision for delivering psychedelic-therapies to those in need based on proven safety, high quality medicines, with specifically-trained guides and practitioners, at the lowest possible cost.  This vision of social-benefit and it is co-created by social support. There is no donation too small. We value your continue and expanded support.  As a non-profit medical research organisation, PRISM is dedicated to working for the public good through the discernment of knowledge processes in psychedelic-assisted therapy, for a future of wellbeing.

Double Blind 2021, Is It Worth Kidnapping Toads to Extract their Psychedelic Venom – When You Could Make It In A Lab?, Viewed 7th March 2021, > https://doubleblindmag.com/toad-venom-vs-synthetic-5-meo-dmt/ <

We are a DGR-1 non-profit research charity developing medical and legal processes for the application of psychedelic medicines for improved wellbeing.

5-MeO-DMT: A primer on a potent psychedelic

Send us an email and we'll get back to you soon.